Add To My Library

The current study purposed to examine the patterns of interactions of two preschool teachers emerged during their in-class teaching. Patterns of interactions can be observed by virtue of a triadic dialogue structure. The teacher opens up the dialoguing through a question, then a response is provided by a student, and then the teacher may determine whether the provided responses is correct/credible, or the teacher makes explications that may elaborate/modify the received response, or the teacher may pose another question pertaining to the provided response. The participants of this study, which was designed as a case study (naturalistic inquiry), were two preschool teachers and 52 pupils. The data set of the present study included video-based records of the in-class implementations (n = 17, 302 minutes). The teachers negotiated the narrated dilemmas created by the researchers with their students that enabled unfolding classroom dialogues. Teachers’ discourses (e.g., articulations, externalisations) were analysed through the systematic observation approach that is a branch of sociocultural discourse analysis. In systematic observations, the unit of analysis was the analytical utterances (sentences) of the teachers. Each teacher-led verbalisation was coded through the Triadic Pattern of Interaction Coding Catalogue that was developed within the frame of the current study by a both data-driven theory-laden manner. It was detected that the teachers displayed three different typologies of the pattern of interaction with different frequencies: Initiate-Response-Evaluate (IRE); Initiate-Response-Explicate (IREx); Initiate-Response-Follow-up questioning (IRF). It was revealed that the IRF triadic was mostly enacted by the teachers in addition to the IREx triadic that was staged in order to explicate/elicit the cases and phenomena under consideration and the IRE triadic that was displayed for assessing the student-led utterances. Furthermore, it was detected that which typologies of the talk dyads, e.g., T-S (teacher-student) and/or S-S (student-student), were preferred by the teachers. It was observed that the teachers had intensified interventions in the classroom talks and that the dialogues between student-student were substantially restricted. In line with the deduced findings, suggestions were offered to develop the conscious pedagogical-discursive noticing pertaining to the pattern of interaction occurring in the teachers’ classroom conversations and may influence the intellectual attainments. 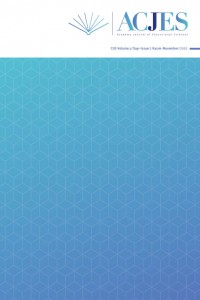